A smorgasbord of books


I'm embarrassed to admit that I'm so far behind in my notes on books I've read that I'm in danger of forgetting which ones I've read, so for now I'm just listing them out, and will give longer reviews later. In no particular order:

Twilight by Stephanie Meyer. I've finally worked out (to my satisfaction, your mileage may vary) why this series became so wildly popular, and why some people hate it so very bitterly. Promise, I'll write more on this some day. 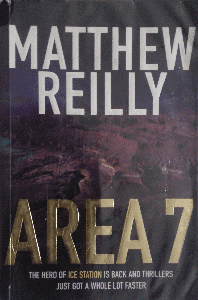 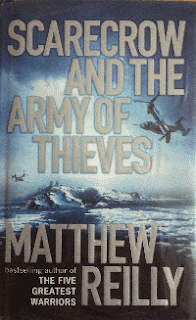 Area 7 and Scarecrow and the Army of Thieves by Matthew Reilly. I think I've written in more detail about Ice Station, the first book in the series, some time earlier, so not rehashing that. Area 7 is the second book, and Thieves is the fifth, so I haven't read the ones in between. Aussie writer M Reilly writes about an American soldier, Shane Schofield aka Scarecrow, who can give Rajnikanth pause, and run rings around Chuck Norris. His books are the equivalent of very fast-paced Hollywood action movies, complete with helpful italics and utterly improbable scenes in quick succession. Suspend disbelief, pack a tub of popcorn, and read breathlessly. It doesn't make sense, you have things like negative and positive magnets, and rusted aluminium tanks, but who cares? Some day M Reilly will grow up and become all thoughtful and plausible and then we'll all stop reading. 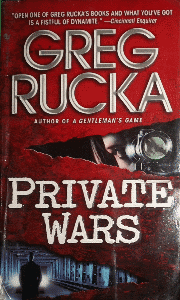 Private Wars by Greg Rucka. This features Tara Chace, Minder 1 in MI6. OK, here you thought the agents with licence to kill had 00 prefixes, and there are at least 7 of them. Wrong, there are three only. Tara Chace leaves MI6 to have a baby (clearly, I need to stop entering a series in the middle), and then is brought back in by her boss. Nothing is as it seems. Uzbekistan is being run by a dictator, and his ruthless daughter and her besotted chief of the secret police are bent on getting her the post next. Her brother is the hitch, being a sort of heir apparent, apparent only to the US Ambassador, who asks the Brits for help. Tara is sent in to get him out. Mayhem follows. Forget James Bond. Cut to the Chace. 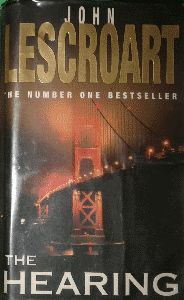 The Hearing by John D Lescroart. Lawyer Dismas Hardy (what kind of name that is becomes clear in this book) is begged by a friend to get her brother to hospital. He's a junkie, and the prime suspect in the murder of Elaine Wager (spoiler warning!) who is the chief detective, Abe Glitsky's unacknowledged daughter and a rising legal star. Abe has hinted to his staff to hang the mugger out to dry, hence the call. Dismas slowly becomes embroiled in the case, though Abe is his best friend, he admired Elaine, and hates his new client. Vintage Lescroart. But read the series in order, okay.

Illegal Action by Stella Rimington. This is what comes of writing without googling first. I have moaned in an earlier post that S Rimington wrote a wonderful first novel and would probably not write any more about Liz Carlyle. Serves me right (but, hey, I'm delighted). She's written five more. This is the third in the series (and I haven't read the second). Liz gets to protect a Russian emigre from an assassination attempt. Yup, the Russkies are as evil as ever. Or are they? I liked the first book more, but this one was good too.

Dang, I've forgotten the next book. Never mind, carrying on...

Brood of Bones by AE Marling. Amazon sent me a hint that this one was a free download for a time. Unfortunately, that means I cannot go out there and give it a five-star rating. Our heroine is the Elder Enchantress, and has won 27 gowns in academia, showing her prowess. For some reason, in a land of banyan trees and protectors named Gautam, she wears all of them at the same time, making movement tiring and complex. Which is the least of her problems, since she keeps falling asleep all the time. In this world, magic is done only when asleep, so her magic is fine, if only she can keep awake long enough to find out what the problem is she needs to fix. The great city of Morimound, from where she hails, has suddenly been afflicted with mysterious pregnancies. Every woman 12 or older is pregnant. Is it godly or an evil magic? Whom can she trust? Our heroine turns out not to be snobbish, incompetent, sociopathic or stupid, but a shy nerdy young woman you begin to love more and more as the book moves on through horrors and petty people to a rivetting end. Read this book! I look forward to more.

I am FanFare by Milo James Fowler. This is a short novel about a different kind of nerd. This one spends his life (if you call that a life!) on a social network. Curious about the ads it shows, he finds a horrible truth, with grievous consequences. Funny and a bit poignant.

Post-Human by David Simpson. What I liked best about this book is the seamless way the post-human technology is introduced to us with the minimum of exposition. In the post-human society, nanobots or nans support humankind with everything from permanent online connectivity, to morning wake-up calls, trauma repair, IQ upgrades and work commutes to Venus. When James Keats, whose IQ of 200 is still above the international average, is working on terraforming Venus, his team suffers a problem and finds themselves offline. Navigating back to Earth by memory, they find every connected human on Earth dead. Now, all their hopes lie with the Purists. Somehow, they have to save the world. Very enjoyable (I'm on the sequel now).

Original opinion of JD at 13:25 No comments: Links to this post