I haven't gone away or anything.

I've gots lots of reviews to write. But for now, I'm uploading all kinds of old reviews from this blog onto Good Reads. I'm actually surprised that there are so many. I have this (correct) self-image of reader who sneakily reads the next 10 books before sighing and sitting down to review, but there's a good number.

Sigh. All that it actually means is that I probably read a lot more than I remember.

The next set of reviews will be of short stories I read on Smashwords. Promise with fingers crossed!
Original opinion of JD at 20:38 No comments: Links to this post

A fallen sun, a whodunit and mindbending world-building

What more could you want? I’ve read several short stories by David Grigg and his short novel A Twist of Fate. I thought he had set high standards. 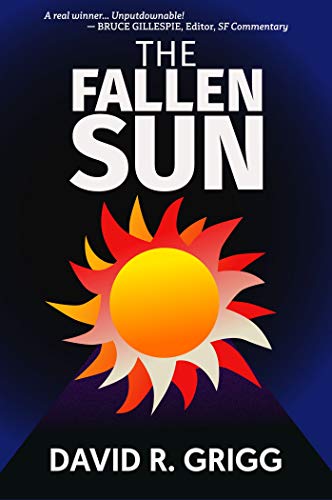 The Fallen Sun has just raised those standards further. It’s going to be difficult to avoid spoilers, because I’m so keen to share the wow moments in this book’s plot, but I shall control myself.

Three young people come of age (we’d call them older teens, but in the world of Sunfall, they are about ‘7 or 8 millends old’) and are faced with having their comfortable if unexciting worlds turned upside down, in a civilisation that is thousands of years old and has totally fossilised its working and culture. Candens and Campana of the Clan of Bellringers are brought up very differently. Only boys like Candens get taught the work of the high-class Clans, and girls like Campana have to content themselves with make-work like embroidery. Because, hey, they will get married and leak the Clan secrets. (Not that Candens, as a second son, has much joy of it either, bitterly watching his elder twin become an addict and wastrel.)

Campana’s friend and Candens' pledge, Adura, will have none of it. She is not keen to be traded as a pawn in clan politics, and joins a secret group. Which has an even more secret agenda.

Things go from bad to worse for our trio, as they get accused of murderous intent, get enmeshed in kidnapping, and get thoroughly framed by the real villains.

This is not a fantasy story, as you’d think at first, fallen sun and so on, but a well plotted sci fi with a fast pace, mindbending world-building, a carefully realised culture, wicked but human villains, a plot with plenty of twists, and whatever else you could want in a sci fi adventure of the very far future. All the while, David Grigg slowly pulls the world itself into sharper and sharper focus. Like any good sci fi, the world itself is a character. (Okay, okay, I promised no spoilers). There are plenty of wow moments as you realise what is really going on. The familiar becomes strange, and the strange becomes familiar as the book goes on. The characters grow upon you, and their flaws become endearing. By the time they are fully tangled in the web of deceit, you’re rooting for them all the way, and turning pages frantically to find out: what next??

This is sci fi of very high quality. You won’t be disappointed.

Read The Fallen Sun if you like... Terry Pratchett, especially if you liked Strata better than the Discworld books; M John Harrison’s The Pastel City; Jack Vance’s Dying Earth books, but you didn’t like that much callousness; historical mysteries and alternative history sci fi of the far past; sci fi that borders on fantasy; epic fantasy which makes sense (no magic); JRR Tolkein, but you would have preferred a faster read with real humans and less Destiny; YA; or sci fi with horses. It’s difficult to say more without spoilers, but this is hard sci fi though it initially reads closer to fantasy.

Disclaimer: I was a beta reader for the book (too greedy to wait for a David Grigg book to be officially released). Let me tell you, the draft version was compelling, but the final version had me spellbound--it blew my socks off, and I grudged my eating and sleeping time.
Original opinion of JD at 21:35 No comments: Links to this post