Matt is 17, going on 18, and haunted by visions of the future. As a kid, he'd had a vision of a fire, and soon after, his parents had died, leaving him an orphan, in and out of foster homes. Mr and Mrs Powell, who foster other children than Matt as well, are good people, but Matt worries that his visions of death and pain would envelop anyone he cares for—and they would die horribly--and so all he looks for is to 'graduate' foster care when he hits 18. He's trying not to rock the boat. 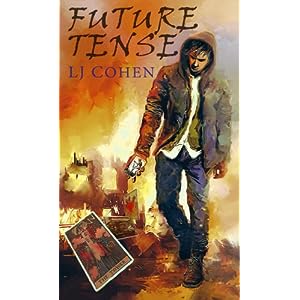 Then he meets Amara, and Amara's great-aunt. Amara's in his school, and their first encounter is Matt inadvertently and anonymously saving her from a group of bullies. The more Amara tries to understand what Matt is about, the more he tries to push her away. Not that he can. Amara's blind great-aunt reads tarot cards, and sees the 'gift' in Matt.

Now, that's the point at which I would normally flap my hands in exasperation and abandon the book, because, I mean, tarot? One step below astrology, the way I look at it. I mean, I was looking at a fantasy book, not a superstition book.

But LJ Cohen's writing dragged me into the story. By the time this came up, I was totally involved with the characters, and I wanted to know how a happy ending could possibly be pulled out of those dark and dangerous visions. It's a fantasy book, and tarot is just a prop for parts of it. You could replace it with potions if that makes you feel happy. (LJ Cohen later told me on her Google+ profile that she uses tarot as a plot-advancing device and does not advocate it, so there. And yes, that does mean the author is accessible to fans).

Suffice to say that said happy ending occurs, after a breathless rush through a fast-paced story with characters you really care about, credible villains, heroic actions, and suitable comeuppance for the wicked. Which is not to say it's a bloodless story. People get hurt, some badly. It's all very credible and real, and you feel every emotion along the rollercoaster of the story.

Do I recommend this book for young adults of all ages?

Do I, indeed!
Original opinion of JD at 18:55 No comments: Links to this post