If you like James Bond stories, chances are that you like the Bond movies. Every time the Bond actor changes, there is a lot of controversy. Still, Daniel Craig seems to have got the thumbs up. Until Skyfall. It may be a well-done movie, all nicely directed and shot, with a super-clever villain, nice camerawork and the like. Yet, ask anyone. Was it really a Bond movie? No. The real Bond does not age past 40. 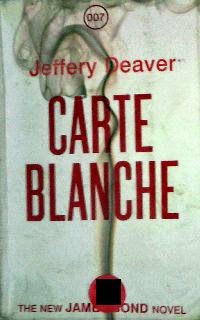 So, does Jeffery Deaver pull off the Bond book? Take a step back. Have you actually read any Bond books? I read quite a few by Ian Fleming, and trust me, they were not worth re-reading. Almost all of the Bond fame came from celebrity endorsement. Until John Kennedy, then President of the USA, mentioned that he found them good for light reading, these books were not bestsellers. Thereafter, they became so famous that it was found churlish to complain that their writing was average, their plots jingoistic, and the humour schoolboyish. Not one of the 'Bond girls' in the books had anything like normality, neither in their appearance nor their names. Octopussy is a name? Come on!

Deaver's Bond has been updated to the 21st century, while retaining his age in the mid-30s. This Bond's history is the newer movies, not the Ian Fleming books, and so he comes with fresh backstory. Which is a good thing.

Deaver's writing is as crisp as ever. The plot fairly whizzes along. There are twists and turns in every chapter. Everyone is thinking three steps ahead of everyone else. You can almost see the movie scenes play out (I hate to say this, but they all look like Craig would fit in them, and not Brosnan). The villain has the Bond villain edge of outlandish villainy, and a name to match. Severan Hydt runs a garbage disposal empire, and loves death and decay. So much that he is willing to quietly dispose of inconvenient dead bodies for criminals.

The action starts with Bond in Serbia, faced with an Irishman, Niall Dunne, about to derail a train carrying MIC, the Bhopal chemical. But that was misdirection. Needless to say, Bond saves the day and the train. And gets drummed out of Serbia for his trouble.

The Bond women in the plot include Ophelia Maidenstone, the South African Bheka (giving her full name is a bit of a spoiler, so I'll merely say it means 'protector'), and Felicity Willing. You can't complain that the names are run-of-the-mill, but they're not as absurd as Fleming's names. One of them gets shot. What did you expect, anyway?

There are gadgets, international travel, fine wine, intra-departmental politicking, fiendish villains, doomsday devices, thousands of lives at stake, chases, shootings, confusion, you name it. Whatever you want in a Bond book, or a movie. Plus, a new, improved James Bond. Who's actually looking for a woman to share a life with.

So, when is a Bond book not a Bond book? When it's a typically Jeffrey Deaver book, with his signature twists and turns. Bond is incidental. Good choice of author, Ian Fleming Publications, but Deaver is taller by far than James Bond.

Which is a good thing.

Original opinion of JD at 16:48 No comments: Links to this post