I made the mistake of picking up two books by Dean Koontz, misled by the blurbs into thinking that they would be mildly entertaining fantasy. Instead, they are the worst of sanctimonious Christian-themed moralising, slightly worse than Christian-themed B-grade American movies. The characters are stereotypes, the fantasy is heavy-handed and one-dimensional, the moralising is constant, grating, and soaked with Christian religious assumptions and new age nonsense.

In Deeply Odd, the main character has a 'psychic magnetism' which helps him identify evil people. One of whom is able to hide in a parallel dimension to avoid being noticed while he wreaks havoc, murdering parents and kidnapping children who are to be killed in a rite by a cabal of satanists to bring the devil into the world. Odd Thomas gets deus ex machina help from wondrous people who are all turning into 'smooth and fully blue' souls, whatever that means, and assorted ghosts. There is no real tension, the story is boring, the pace is plodding, and we are constantly told about his goodness in lengthy paragraphs divorced from the story itself. Most of the conversations are peppered with Thomas 'ma'am'ing the old lady who pops up in a souped-up limousine when he needs a ride. Each conversation belabours some silly point over two or three pages, which really needed a couple of crisp sentences.

Innocent is worse. Addison Goodheart has a face that immediately drives anyone who sees him, or even just his eyes, into attempted murder. Even his mother cannot resist beyond about 8 years, and commits suicide to avoid killing him. He reaches a city, where he is adopted by a man with the same kind of face. They hide in an underground room built long ago, furnished and having had electricity run to it, because god must have wanted it. Yes, seriously, that's what Koontz says. Food is 'donated' to them via a church where a 'good man' has given them a key to the storeroom. Education comes from midnight sallies to the local library. Addison meets a girl there, who is being chased by an evil man who steals antique books, has murdered her father (a millionaire) and wants to rape her. Yes, you guessed it, same as I did after about 20 pages: Addison looks so innocent that people immediately want to beat him dead. Seriously?? No, no, this is inevitable, because he does not have any original sin in him, and ordinary persons go into a frenzy of jealous murder at one glance. Eventually, everyone in the world is killed except a few kids like him and the girl, by a virus which the planet has come up with to finally get rid of bad humanity. The good priest restrains himself from killing them long enough to perform a Christian wedding ceremony. Dogs and kids live happily after on fruits. Fruits.

This author has a truly warped image of people. They are either idiots blundering through life with no purpose other than to provide victims for evil people, or so naturally bad that goodness drives them to murder. The goodness itself is so because it is declared so, and so saccharine that it is nauseous. Every fantasy trope from bad Christian American movies is there. There is no depth of characterisation, there is no tension in the plot, the situations are contrived and unreal, you can feel no sympathy for the protagonists, and no identification with their goals, let alone their thinking processes. Per Koontz, the only goodness in the world was in the 1930s or earlier. Modern life is inherently evil. The only good that technology brings is trucks and guns, which can be used to zoom up to and blow apart the bad guys. Government is in place only to give a chance for evil people to enslave the unthinking multitude with fear, despair, technology, whatever else he doesn't like. Perhaps excepting the god-ordained dollar.

I began to wonder why I bothered to learn to read if stuff like this litters the world! The tragedy is that these are best-sellers. Which perhaps explains why televangelists are millionaires, and why religious rightists are thriving. Now excuse me while I go off and retch.

Original opinion of JD at 20:18 2 comments: Links to this post

What's mind got to do with it? Mind is nothing but a second-hand emotion. 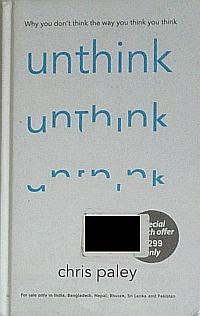 
“If the book we’re reading doesn’t wake us up with a blow on the head, what are we reading it for?” - Franz Kafka

Why indeed should we so waste our time? Just read Unthink and get a solid whack, one that turns out all the silly and wrong assumptions about what a mind is, and why we have one.

This book is a must-read for anyone who wants to know why we think. Almost every page had me going 'wow' and 'really??' and I read the book with a silly grin on my face most of the time. Read it. You'll never think of your mind the same way again. Read it. Leave that silly whatever-else-you-were-planning-on-reading and do yourself some good in 2015.
Original opinion of JD at 18:28 No comments: Links to this post