Beware of the Trojans bearing gifts 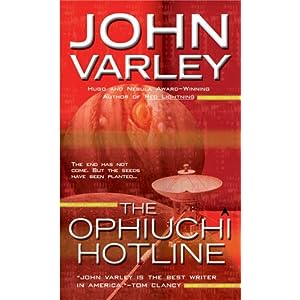 The Ophiuchi Hotline is based in the same Universe as Varley's short story collection, The Barbie Murders, and the novel Steel Beach (and possibly others that I have not read). The Earth has been Invaded, and the first-level intelligent Invaders have sanitised the planet of those pesky pests, humans, to fix it up nicely for the second level intelligences, dolphins and whales. Holy Cetacean, as the characters sometimes say. So, the third level intelligences still left alive on Earth, Luna and the other planets redevelop tech and spread out to the other planets, except Jupiter (where the Invaders continue to live). Now, in this process of bootstrapping themselves, they are aided by a transmission from 70 Ophiuchi (The Snake), called (you guessed it!).

OK, so back to the book I recently reread. (Yup, somewhere around the 80% mark, I knew some of what was coming next, so I know it's a reread, but having conveniently forgotten the main plot points, like does the villain get his/her comeuppance, I could read it just like new).

Lilo has been sentenced to death for tinkering with the human genome. Permanent death, not the temporary type used for lesser crimes, where the person is regrown as a clone and their memories pumped back from before when they got up to their devilment. Her sentence gets postponed so that students of psychology get some live studies in over a summer. And then, an out-of-office politician offers to let her clone die instead of her if she will work for him. Boss Tweed is a rich Free Earther, who wants to throw the invaders off the planet. Lilo is killed escaping. Thrice. Eventually, Tweed needs her help because the Ophiuchians send a bill (which is why I named this post what I did, but OK, no more spoilers).

This is an adventure story, with plenty of hard science scenes, but also with a set of empathetic characters and a cool-eyed examination of how our culture and ethics are shaped by our technology, and vice versa.

A fun read, breathlessly fast in parts and more leisurely in others. It also has my mandatory: a happy ending.

Everyone should read more John Varley stories. They will stretch your mind, sometimes beyond its elastic limits. Which is a good thing, ok? I've liked his stories since I first came across The Barbie Murders, followed by the Titan series, which I started from the middle (I do a lot of that; books don't always hit the bookstores in India in a nice, logical fashion, especially minority genre books like science fiction) and finished only a few years ago. Like Larry Niven, John Varley has a world-spanning imagination, and all kinds of high-tech at close-to-magic levels shares paragraphs with descriptions of space, say, Saturn's rings, and spans a whole range of weird human motivations. In Niven's worldview, sanity is enforced, Earth is weird, space is deadly and space guys almost make sense. In Varley's view, sanity is not easily defined, humanity is defined more and more widely, and space is just another frontier.

No samples from The Ophiuchi Hotline this time, but here's a thrown-away line from one of the stories in The Barbie Murders: a floor is something that planet-bound people put between themselves and the planet, so that they don't fall all the way to its center. :D Doesn't that give you a totally different view of the downtrodden floor? For days after I read that, I was totally conscious of the pull of gravity towards the center of the planet, some six and a third thousand kilometres down. Every metre of it. Eventually, the sharp edge of awareness faded, and I reverted to participating in the collective consensus, where we avoid thinking of the mass and size of the planet that holds you in place while you run after a dog or something, and ignore the miracle of airplanes.

[Edit: the sample is from the story Lollipop and the Tar Baby, which had escaped my memory till now.]
Original opinion of JD at 18:12