Series books from the middle out, part 2


The Queen of Death is book three in the series The Lost Mark. You already know I ranted about kings and queens behaving democratically in a previous post. Well, they are all pretty democratic in this book, but then, they are just a group thrown together and having a common adventure. The kings and queens act as nastily as you would expect (but you don't come across many of them).

This is an easy read, with enough adventure to satisfy you, enough characterisation to make the people in it human (or elves, changelings, shapeshifters, dwarves, dragons, what have you) and likeable.

The world has twelve dragon marks, that may manifest themselves on (at least) elves as they grow. But there is a thirteenth, lost, mark, too: the mark of Death. 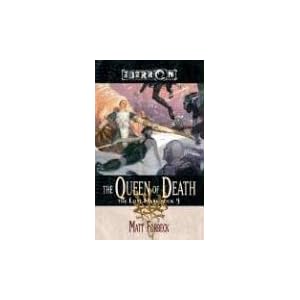 And Espre has it. Her stepfather, Kandler the justicar, is adamant that he will protect her from any and all enemies, come what may, even if it means flying the magical airship Phoenix into the maws of the dragons on their own continent. Arguing with him on the airship are his new lady love, a knight of the Silver Flame; an old friend who is also a shapeshifter (but doesn't shift any shapes in this book); a dwarf who used to guard his village against a dragon who was vanquished in the previous book; a young woman shaman; a five-year-old robot/cyborg created in The Last War (optimistically named); and a changeling who can mimic anyone and frequently does, who was responsible (in book 1) for all this kerfuffle in the first place, and whom nobody trusts.

Dang. Makes me wish I'd read the earlier books.

Anyway, my tendency to carp about democracy in monarchies apart, this was a fun, light read, mostly due to the crisp, argumentative dialogue, and the basic decency of a father's love for his daughter (step, from a different species). This is a book I liked.

Espre's breath caught in her chest. "Sometimes," she said, "Mostly not."

"There's nothing simpler than being dead."

"Perhaps it would have solved your problems."

Espre snorted softly at that. "No. It would have just ended them."

This time Espre believed he did.

Email ThisBlogThis!Share to TwitterShare to FacebookShare to Pinterest
Labels: fantasy, Matt Forbeck, The Queen of Death