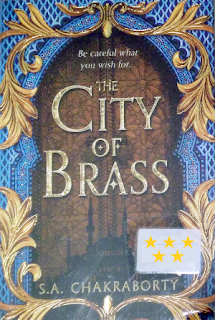 It's a great read. It has humour, mystery (the best kind; 40 pages on, you say to yourself, waitabit, this was mentioned before; so that's what it meant).

Yes, I would certainly read the next book. Eagerly looking for it (I understand it's out).

I was a bit surprised to see so much detail of historic Egyptian society and Muslim mythos from someone named Chakraborty, but I think it comes from a) her spouse and b) being in Egypt for sufficient time, c) resident in the USA. Not that I mind. I prefer fantasy to be placed in a European or West Asian or East Asian setting, anything other than what I know best, so that there are less chances of my shaking my head and muttering noooo....

The story revolves around Nahri, who is a con artist in Cairo, who heals abnormally fast, but doesn't believe in magic. Until she invokes a djinn named Dara(yavahoush) aka the Scourge. Who sniffily insists he is not one of those inferior creatures, djinn, but an identical being called a daeva. (It's political). She's quite happy to go separate ways, except that ifrit (also identical, but both djinn and daeva look down on them) attack them, and they need to flee to Daevabad for her safety. We learn quite a bit about the different categories of magical beings, peris and marid and lesser creatures like murderous rukhs and the like. Nahri herself belongs to a category called shafit who are human-magical-being hybrids, and much oppressed, mostly for religious reasons but also for other reasons, which emerge slowly.

In the meantime, we also meet Alizayed, aka Ali, the second son of the Daevabad ruler. More politics ensues. Ali is too serious, working hard to be a good little Qaid for his brother as and when he should ascend the throne. Much too good to be true, at heart a softie despite being the best sword in the land, clueless about the value of money while understanding economics perfectly. A conscientious nerd.

The two story lines proceed in parallel for a while, and then rapidly converge in Daevabad. Quite a lot of interest is sustained in liking both of them, and finding they are likely to be on opposite sides. How is this tension going to be resolved? Both young people get tossed here and there on political currents. Our friend Dara the 1400 year old daeva turns out to be an accursed undead doomed to slave for humans. More politics ensues.

It's all great fun, very intriguing. Most fantasies have a social background that is superficial, but this one is not. The viewpoint is that of naive and idealistic teens/twenties, but behind the screen there is religion (several, actually), Big Power politics, and even ... economics. Bravo! Few writers get that aspect right.

Yet, it would not work without solid characters whom we care for. Here, even the villains are multi-dimensional, villainous because they are pitted against Nahri or Ali, but even then each has his or her motivations fleshed out and we can understand them, feel for them, and then hope that the conflicts get resolved without bloodshed. Of course, SA Chakraborty is too savvy for that, and assorted characters get killed to the sounds of our groans and curses. No mere JK Rowling this, whose books ended up with so many characters that you had to write them down in neat tables to keep track of them.

I like the villains. Hey, I even like Ali's sister, who is the closest the characters get to the wicked spoiled rich cool girl of schools that is quite a trope. Except one or two of them... I'm sure I will get to like them all in book 2 when they get more screen time... In the meantime, I love and hate Ali's father at the same time, have great affection for his brother, can sympathise with his (absent) mother, really hate Nahri's mother, loathe a Minister, and so forth.

Now, you all know of a famous writer who is fond of killing of characters in his books/series more for shock value than anything else (treats it like a Game). This is not so for The City of Brass. Any deaths, any conflicts, any misunderstandings, any alliances, all flow from their own internal logic, and perfectly naturally. It only faltered once toward the end, before recovering and proceeding in a brand new direction.

I actually held off picking up the next book on my bedside for a day just to savour the aftertaste of this story.

If I liken a book to a meal, this one is filling while leaving you slightly hungry. Sweet, salty, sour, even hints of bitter, in a perfect blend. The wait service also being impeccably timed, you give the restaurant a 5 star rating, and decide to host your next party here, and go away calculating whom you can invite for it, and which halfway acceptable occasion is nearest in time. In other words, eagerly anticipating book 2...

If you loved Meghan Whelan Turner's Thief of Attolia series, you will equally love the Daevabad books.