A few weeks ago, I was pleasantly surprised to find that a book I had liked was about to be released on screen, so I decided to refresh my memory before the screen adaptation was released. 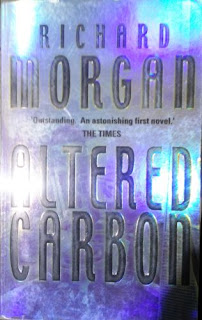 What I remembered after a few years was that there was a murder mystery, very ingeniously written, and with all clues duly handed to the reader. If you’re really, really sharp, you can figure it out for yourself, but that’s if you get past the action scenes and have a few minutes to breathe and think! I also remembered that the name of the book was never explained. Why Altered Carbon, after all? What was the alteration?

I also read online that the screen version (on Netflix) had attracted complaints: of white-washing (why wasn’t an Asian playing Takeshi Kovacs) too many sex scenes and too much blood. I rolled my eyes at the first. In Chapter 1 itself, the Envoy feels upset at being put in a Caucasian body. And he’s half East European, so what’s with the Asian-Asian thing? He’s Asian-European. Eyeroll, and more eyeroll. So, what about the other complaints? Since I remembered the iconic scene in the AI hotel as the second thing in the story, along with the neatly packaged whodunit, I was keen on checking out if the original actually contained the complained of sex and violence.

What do you know? It does. Every second chapter has mayhem, and every third or fourth is hidden behind too much steam. And yet, they are so integral to the plot that you wish Richard Morgan had written less of them, while scratching your head as to how that was supposed to be done short of censoring whole scenes and replacing them with asterisks, and thereby removing the immediacy of the motivations of the characters.

So, since the book is sufficiently famous, let me mutter and grouse about the screen adaptation. Now, here’s the thing, I haven’t yet read the other two books in the series, and I understand the screen adaptation (10 episodes/hours) leans heavily on stuff that is made clear in them, like about the Elder civilisation, which hardly rates 10 lines in book 1.

Mutter and grouse no 1: why didn’t Bancroft have a ponytail? Honestly, I expected him to look more like Malfoy senior, but by episode 3, it was not such a big deal.

Mutter and grouse no 2: You can’t mix Virginia Vidaura and Quellcrist Falconer! That is just not done! Waily waily, indeed, on this one. Quell is a distant person in the book, a bit like Mahatma Gandhi. Sure, people have actually met him, but it’s scarcely believable. In the screen adaptation, she’s right there, real as anything and twice as solid. This bit grated right along till the very end. Virginia, in fact, is the one who trained Kovacs. And then to mix her up with Sarah, who gets short shrift by getting only one scene, whereas she is a pivotal motivation in the book? Naaah!

Mutter and grouse no 3: What’s with the Envoys being terrorists?? They were the elite troops of the UN Protectorate, not the enemy. Envoys who moved to the private sector, like Vidaura and Kovacs, turned into master criminals. They weren’t wiped out. They were around. Our protagonist is disavowed, but the organisation is very much alive. Kovacs threatens the people in the Wei Clinic with them.

Mutter and grouse no 4: Why was the Hendrix downgraded to the Raven? Wail! Poe? That’s like ... Kung Fu Panda, not a deadly AI. But the scene in which Takeshi asks for a room? Very well done, and true to the book. That’s the point I’d decided would determine if I continued watching or not. Kudos for holding on to the viewer who wants faithfulness to the book.

Mutter and grouse no 5: What’s with the sister and associated maudlin stuff? Reileen Kawahara in the book was so much more believable. Sister?? Eyeroll all the way. Where’s the water-carrier, eh?

The screen version has stuff that diverged so much. Backstory for Kristin Ortega. A different bodyguard. A son for Bancroft instead of Kawahara. Deus ex machina for Lizzie Elliot. An evil CTAC colonel. Ya, well, it’s all good. Otherwise, I could just read the book, right?

But here’s a really cool thing spotted in Episode 1 by my resident youth: check out what’s written on the side of the Police cruiser. Hee hee hee. I now believe totally that the series producers went truly overboard in trying to be as inclusive as possible, to counter the accusations of white-washing.

And you know what? The lead male actor is totally cute, as is the lead female actor. The Bancrofts are believable. Dimi the Twin is as evil as expected. The sets and special effects and CGI are super (I guess even better in 4K, except that I have no such screen). I only keep tripping over Reileen Kawahara and her katana. I look back on the ten episodes of series 1, and realise that the sex scenes, like in the book, leave less impact on my memory than the screen time they get. The mayhem scenes are gruesome, as in the book, or maybe more so. The burning forest is totally crazy (yes, I did notice that they ran all the ‘rebel’ scenes in brown and green, unlike the more popular cyan and orange colour schemes in most movies).

Is the screen version faithful to the book? Not as much as LOTR, a lot more than I Robot. Is it the same story, with the same characters? About as much as the new version Star Trek movies of the alternate timeline James T Kirk and Spock are the same as the original series/movies. So yes, it’s only nominally the same story. The book is denser, but the series is worth watching. Go for th
em both.