The Atlantic Council Art of Future Warfare Project created in 2015 a book of science fiction, ostensibly "to shed the shackles which bind us to our current constructs and instead imagine things as they might be, for better or for worse," as Gen Dempsey says in the intro, "hope they make you think. Glean as many lessons as you can, but don’t blindly accept the authors’ conclusions. Challenge them. Wrestle with them. Refute them if you can. And build these insights into your mental arsenal so we can better understand how these evolutions—in some cases revolutions—of technology might affect our national security." 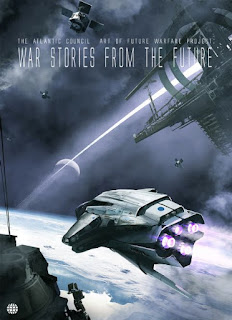 Pfft, say I. Read them as sci fi and review them the same. Hardly two stories made me think of how war would take place in the future, and I think they may already be outdated. So, here goes, story by story:

From a Remove by Alec Meden brings us a shadowy cyber group of 'sovereign citizens' who enforce the peace, at the point of space-based weapons platforms. Any of them could be your classmate sitting with you in a lecture, and controlling the drone spacecraft that protect the space reflectors set up to combat global warming, like Donya. But what if the nation states, displaced by the Sovs, chafe and plot revenge? Space opera, by all means.

Article I, Section 8, Clause 11 by Ken Liu. This story brings home how little the USA believes in international law except in its own understanding, though that's probably not what the author intended. An irritated presidential hopeful lets loose cyberterrorists, granted permission by the USA government as 'privateers', with not-so-well-anticipated consequences. Wish fulfilment, possibly.

A Stopped Clock by Madeline Ashby is a little love story set in the great cyber crash that afflicts future S Korea. A little rice and kimchi goes a long way to a return to barter when the entire cybergrid mysteriously goes down. This one is more pure story than thought experiment, and better for it.

A Visit to Weizenbaum by Jamie Metzl is a story of psychological support provided to soldiers manning the last line of defence, by an AI. It's also a chilling look at the kind of pressure a 'last line' faces, and how dehumanising such military demands can be, never mind the light touch and relatively innocuous problem the soldier brings.

ANTFARM by August Cole is one of the most future-war stories in the collection. The title of the story is the name of a flying 3D fabricator which produces custom bombs and drones to destroy designated human targets. The targets are validated by crowd-sourcing analysis from civilians back at home, who have rather strong views on how seriously their thumbs up or down should be taken. The pilot on the spot, though, feels he has to overrule them sometimes. That's a conflict entirely separate from the distant war of drones that most of us already know about at the current, less high-tech levels. This one is macabre in its opinion on what's just. One of the best in the book.

I normally read the story first, and then check the author but when you see that Linda Nagata wrote Codename: Delphi, you won't be surprised to find I thought this one of the strongest stories in the book, heartbreaking and eerily predictive. Delphi is the code name of a volunteer who makes extra money by taking a shift, sitting in the home country, monitoring the drones that gather on-ground intelligence for soldiers in the field, and giving them back-office support in real time. This is one of the stories that seems to be a likely prediction of the wars of the future. It's the stage between human-run wars and wars run by drones and AI.

The Exception That Proves the Rule by Mathew Burrows is based in near-future UK, with its ubiquitous surveillance, and shows how human failings break the best models. The story is about a predictive system to analyse everything from DNA to friends' networks to finger terrorists before they strike. It only needs one failure...

Coffee, Wi-Fi and the Moon
The unknown story of the greatest cyber war of them all by Nikolas Katsimpras starts with blank computer screens and the sound of typewriters in newsrooms, and walks us through a cyberwar that brings most nations to their knees. Like most near-future sci fi that predicts near future, it gets some things spectacularly wrong: Dick Cheney has comprehensively beaten the predicted death in 2016, Putin is still alive and Hillary Clinton is not the President of the USA. But it's not yet 2019... Nope, I see no chance of this story being real in any way.

A Need for Heroes by David Brin has a war in Central Europe in its past, and the big military targets being ... poachers. UNEPA is the glam group that mere UN soldiers aspire to. This is still a story of the camaraderie, cowardice and courage that form most soldiers' real life experiences, not really predictive in any sense.

Another Day of Infamy by Ashley Henley is a future declaration of war, bland and scary in its almost stereotyped phrases. I don't forgive it for the acronym of the Federation Alliance of Socialist, Communist, and Islamic State Members. I suspect the writer giggled his way through 1000 words on that basis alone. Nope, buddy, no forgiveness.

All in all, mostly good stories, three good pieces of art inside the covers, and a few gems. You can get it for free here.